It covers the reasons for a very sharp rise and fall in child and family migration, which peaked in May. It reviews the Trump administration’s implementation of “Remain in Mexico,” “Metering,” “Safe Third Country” agreements, and other measures that, taken together, all but eliminate the right to seek asylum in the United States by approaching the U.S.-Mexico border. It discusses other rights issues like the threats migrants face while waiting in Juárez, miserable asylum processing conditions, deaths while attempting to avoid apprehension, and use of force. It provides an update on border wall construction in this sector, and on the worsening security situation in Ciudad Juárez. Finally, this memo concludes with a note of praise and concern for these cities’ under-appreciated community of advocates and service providers. These are people bearing a heavy burden, and many are traumatized by the human suffering they witness, the bottomless need for their work, and the mounting obstacles they must overcome to do it.

Child and family migration from Central America has been increasing steadily since 2012. The factors driving it—insecurity and violence, lack of opportunity, climate change, desire for family re-unification—are as strong now as they were then. Smugglers and others who benefit from the status quo of migration aren’t going out of business. It’s ludicrous to expect long-lasting results from heavy-handed measures, like those that the Trump administration is now pursuing, that emphasize punishment while leaving the causes in place.

We wrote this in a hurry, posting it within five days of our return from the border, with the goal of getting our findings out before the end-of-year holidays. This memo has thus undergone a less thorough editing process than usual. It may contain minor errors, and we will add revisions as necessary.

The big 2019 increase and decline in family asylum seekers

U.S. authorities divide the U.S.-Mexico border into nine sectors. Three years ago, WOLA visited the “El Paso Sector,” which comprises the westernmost 88 miles of the Texas-Mexico border and all of the 180-mile New Mexico-Mexico border, including the large cities of El Paso, Texas (population 680,000) and Ciudad Juárez, Chihuahua (1,500,000). 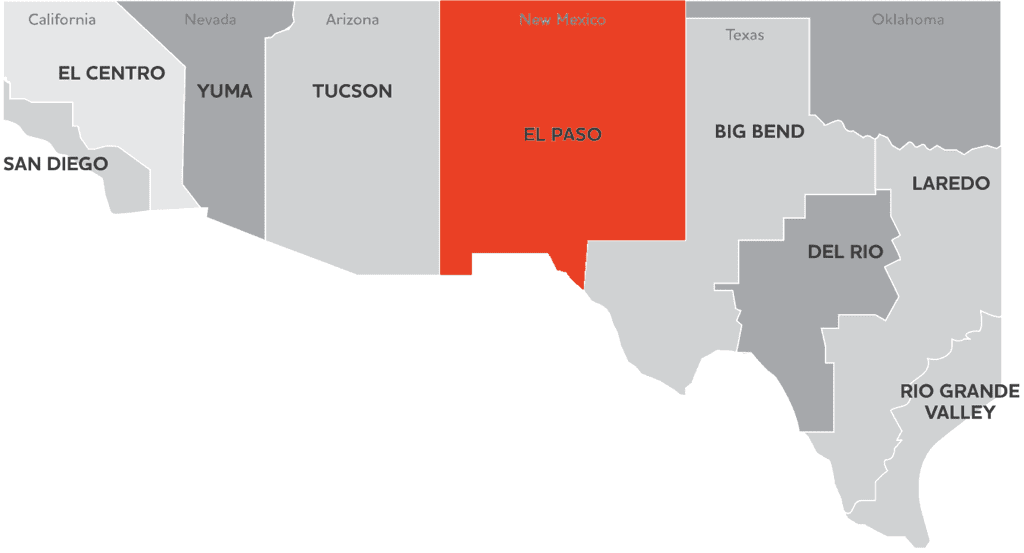 We went there because, at the time, it seemed like the most “typical” border region. Whether measuring migration, drug seizures, violence, or human rights abuses, El Paso ranked in the middle of the nine sectors.

After visiting, we’d concluded that the area was witnessing a growing humanitarian crisis, but not a security crisis. Today, national security threats are still scarce. But we found during a December 11-13, 2019 return to El Paso and Ciudad Juárez that the humanitarian crisis has multiplied. 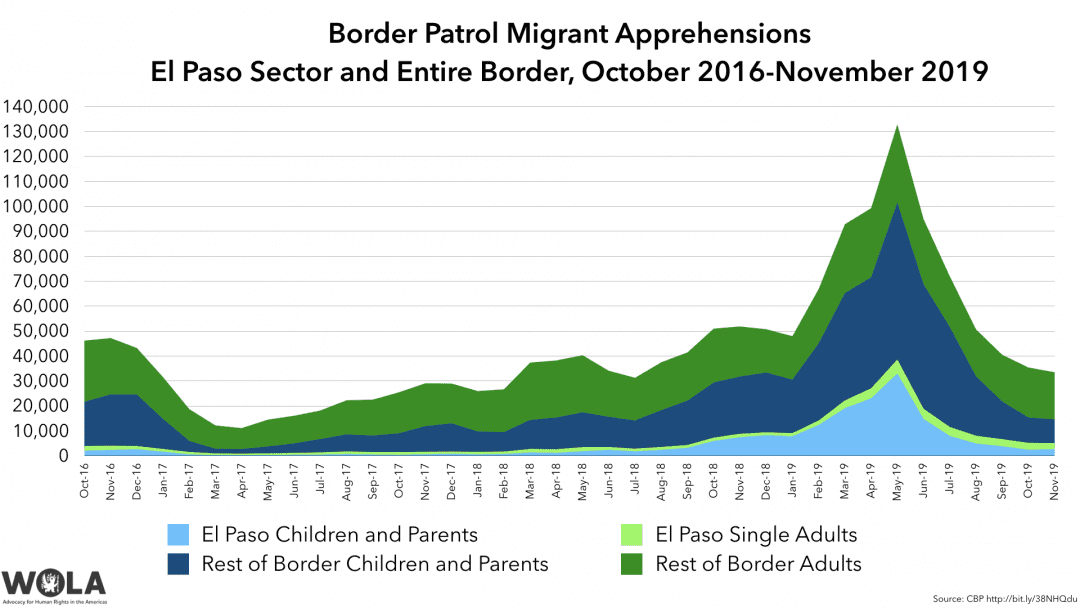 The big 2019 increase and decline in family asylum seekers

Box: A Terrible 2019 in El Paso and Ciudad Juárez

The decimation of the U.S. asylum system

The helpers are exhausted

Header image above: Coils of unused concertina wire sit on the borderline at the top of the Paso del Norte bridge between El Paso, Texas and Ciudad Juárez, Chihuahua.

At its height during the spring of 2019, the migrant wave involved hundreds of parents and children arriving together in batches, often in remote desert areas of New Mexico’s western “Bootheel” region, like the tiny border-crossing town of Antelope Wells.

Since a 1997 court settlement prohibits long-term detention of children, most families received dates to appear in immigration court for their asylum claims, and were then released into El Paso. There, most spent a short time in a charity-run respite center, Annunciation House, which gave them meals, clothing, a place to stay, and contacts with relatives for travel to elsewhere in the United States. At the height of the migrant wave, Annunciation House was taking in several hundred people per day—CBP and ICE dropped off 1,050 on the heaviest day—and spending about US$100,000 per month to put migrants in local hotels.

In an interview, Border Patrol agents said that by mid-year the sector’s El Paso Station had only two or three agents available to patrol the entire 11 miles of border that are the station’s responsibility. The rest were filling out intake forms, taking people to hospitals, or managing holding spaces filled with children—though these cells had been designed to hold what until recently was the typical migrant population: single men.

While most migrants came from El Salvador, Guatemala, and Honduras, they represented well over a dozen countries. A growing number of Cubans and Brazilians arrived in Ciudad Juárez and El Paso and, later in the year, the number of asylum-seekers from elsewhere in Mexico began to grow. In fiscal 2019, according to Border Patrol figures obtained by El Paso’s Border Network for Human Rights, the most frequently apprehended migrants in the sector were “Guatemalans (79k), Hondurans (42k), Brazilians (16k), Salvadorans (15k), Mexicans (15k), and Cubans (12k).”

And then, starting in June 2019 and accelerating through the fall, the number of migrants plummeted. Those with whom we talked disagreed on the explanatory weight for each, but they pointed to two causes.

First, in June, Mexico began deploying its National Guard, a new force meant to be civilian but for now made up mostly of military personnel, to its northern and southern borders to help interdict migrants. (A December 2019 WOLA report discusses the National Guard at Mexico’s southern border.)

Second, Mexico agreed to a vastly increased application of so-called “Migrant Protection Protocols” (MPP)—also known as “Remain in Mexico.” This program, launched in January 2019, sends most non-Mexican, Spanish-speaking asylum-seekers back to Mexico border towns, for weeks or months, to await their eventual hearing dates in the U.S. immigration review system. As of December 13, Mexico’s government reported receiving over 60,000 non-Mexicans under MPP.

The inability to access the U.S. border, or to pursue asylum cases inside the United States, caused family and child border crossings to fall so much that, by September, the Department of Homeland Security (DHS) announced an “effective end” to the practice of releasing asylum-seekers in the U.S. interior to await their hearings—though some families from Mexico and non-Spanish-speaking countries are still being released. Today, the cavernous warehouse space that Annunciation House had been renting east of El Paso is nearly empty.

In November 2019, Border Patrol apprehended 5,084 people in the El Paso sector, while Customs and Border Protection (CBP), which manages official border crossings or “ports of entry,” allowed 1,727—many of them asylum-seekers—into the country. This is an average of 227 people apprehended or admitted per day; it is most likely that nearly all were either detained, deported, or placed into “Remain in Mexico.” A handful of families were released into El Paso, and most unaccompanied children were turned over to the Health and Human Services Department’s Office of Refugee Resettlement.

Because they cannot be returned to Mexico—the country they’re fleeing—or blocked from traveling within Mexico, this 227 per day includes a higher proportion of Mexican citizens, including many asylum seekers. This is because fewer Central Americans are attempting the journey during the crackdown, and more Mexicans are doing so amid worsening violence and greater knowledge of the possibility of seeking U.S. asylum. In Ciudad Juárez, about 3,000 Mexicans came to this border zone in September, mostly from violence-torn areas along Mexico’s drug trafficking corridors: the Pacific zone states of Guerrero and Michoacán, and the central state of Zacatecas.

The deployment of Mexican National Guardsmen and “Remain in Mexico” are only two of several obstacles that have been thrown up this year in front of people seeking asylum in the United States. Asylum-seekers who try to enter the United States properly, by entering at a land port of entry, are “metered”: prevented from accessing the U.S. side by officers refusing to accept more than a few people per day. A new rule would ban asylum for anyone who did not first seek it in a country through which he or she crossed en route to the United States. Some non-Guatemalans are being sent back to Guatemala to seek asylum there, and the same may soon happen to non-Hondurans in Honduras. U.S. authorities are subjecting others, including Mexicans, to new pilot programs that dramatically reduce adjudication time and aim to issue credible fear decisions within days, while limiting access to counsel.

These hurdles are virtually insurmountable, essentially erasing the possibility of seeking asylum in the United States. Many of them have been piloted in the El Paso sector, where the initial 2017 trial of the Trump administration’s so-called “Zero Tolerance” policy led to U.S. border officials separating thousands of children from their parents in mid-2018. Nobody whom we interviewed could explain why El Paso so often gets used for pilot tests of harsh new border measures. Perhaps it’s because El Paso is one of the larger border cities and because—unlike San Diego, California—it’s not under the purview of the U.S. federal judiciary’s 9th Circuit, which is regarded as more liberal in its jurisprudence.

A Terrible 2019 in El Paso and Ciudad Juárez

The year begins with fallout from two December 2018 deaths of Guatemalan children in El Paso sector Border Patrol custody. Seven-year-old Jakelin Caal Maquín died of dehydration, shock and liver failure on December 8, and eight-year-old Felipe Gómez Alonzo died of influenza on December 24. Both had been apprehended with their fathers: Caal in a remote area of New Mexico, and Gómez in New Mexico after being held in El Paso.

As springtime brings an increase in arrivals of migrants, Customs and Border Protection (CBP) keeps hundreds in a pen under the Paso del Norte bridge for up to four days while they await processing.

A wave of mostly Central American migration crests, with 38,637 migrants—nearly 1,250 per day—apprehended by Border Patrol in the El Paso sector alone. Of these, 33,064 (86 percent) are parents or children.

After President Trump threatens Mexico with tariffs if it does not crack down on migration, use of the Migrant Protection Protocols (MPP, or “Remain in Mexico”) dramatically expands. By mid-December, nearly 18,000 non-Mexicans will have been sent to Ciudad Juárez to await their asylum hearings, out of more than 60,000 border-wide.

Attorneys inspecting an overcrowded Border Patrol station in Clint, east of El Paso, report on “appalling” and traumatic conditions for 250 children crammed there to await processing.

A Dallas-based gunman driven by hatred of migrants opens fire in an El Paso Wal-Mart, killing 22 mostly Mexican and Mexican-American shoppers and wounding 24.

DHS rolls out the Prompt Asylum Claim Review (PACR) program, piloting it in El Paso. In November, it will do the same for the Humanitarian Asylum Review Process (HARP), which is applied to Mexican citizens. Both programs aim to adjudicate asylum claimants’ cases super-rapidly while they remain in CBP custody with almost no access to counsel.

A federal judge in El Paso orders a halt to some border-wall building, as part of a lawsuit against President Trump’s declaration of a “national emergency.” The decision suspends the use of $3.6 billion in Defense Department funds for construction. It is followed up in December by a nationwide injunction.

An organized crime rampage in Ciudad Juárez, an apparent retaliation for recent arrests of criminal leaders, kills at least 10 people and leaves burned-up buses scattered around the city.

In an effort piloted in El Paso, DHS begins sending some migrants to Guatemala to seek asylum in that country’s migration system, in compliance with a “safe third country” agreement first reached in July.

CBP expands MPP into its Tucson, Arizona sector by sending busloads of asylum-seeking migrants to El Paso, from where they are then returned to Ciudad Juárez.

The decimation of the U.S. asylum system