I often find myself thinking about Charles Darwin and Murray Bowen and their ability to see the world from a different point of view.  They are not unique in their ability to do this but it is a rare quality.  There is enough information about both of these men to draw some parallels and to see differences.  I am not sure what the outcome of a project like this could be. 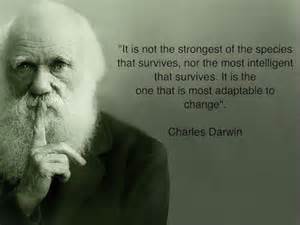 Charles Darwin set out on the Beagle voyage at a time when there was little known about the actual age of the earth. Geology was just beginning to be studied and understood. Religion still in many ways dictated how science was studied and interpreted.  Many clergy used their free time to collect insects and study the natural world.  Science was based on the belief that a supreme being/God created the universe as it currently existed and that species were immutable.  That is they did not change over time.  God created them as they currently existed.

Farmers had developed breeding tactics to improve their livestock to give more milk or their pets like pigeons and dogs to enhance sought after traits like hunting or color.  In this way the idea of an immutable species was beginning to be challenged.  Species could be changed through successive generations by human intervention.  This occurred before Mendel’s experiments on peas which led to an understanding of genes.

Darwin’s five years voyage on the Beagle introduced him to new species, unfamiliar terrain, unique rock formations, and people completely unknown to him.  Early in the voyage he read a book on geology that may have led him to question current beliefs about the age of the earth.  The wide range of specimens from the voyage gave him the opportunity to make connections with leading scientists who poured over his findings and began to write about them.  He developed professional relationships with a wide range of people who studied rocks, birds, mammals as well as trees and plants.  Darwin was invited to join prestigious societies that studied science and published papers.  He developed broad knowledge of the natural world.

Darwin and his growing family moved to a large house in the country where he could walk the fields, read, think and write.  I believe he employed inductive reasoning to begin to develop a theory of natural selection.  He conducted hundreds of experiments like soaking various seeds in seawater to see what seeds would grow after being immersed and how long they could remain fertile after being in seawater.  He spent 7 years dissecting barnacles.

He kept his growing theory of evolution by natural selection mostly to himself because he knew it would challenge the widely held theory of divine creation and was at odds with religion and the Christian bible.  Eventually he was forced to publish his ideas or loose the advantage his 20 years of work had created.  To this day many Americans do not endorse the theory of evolution by natural selection nor do they understand the theory.  Many high school science teachers do not teach the theory or teach it incorrectly.  The difference between a belief system and scientific facts continues to challenge many people. 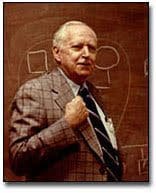 Murray Bowen entered the field of medicine after growing up in rural Tennessee where he helped with farm work and the family funeral business.  He learned to hunt, raise livestock and raise garden foods to carry the family through the winter.  World War II interrupted his medical training and he spent time working with soldiers who had suffered psychiatric symptoms as a result of their war experience.  After the war he shifted his specialty from cardiology to psychiatry and joined the staff at the Menninger Clinic in Topeka, Kansas.  There he trained in psychoanalysis and had an active caseload of patients while also undergoing psychoanalysis himself.

Psychoanalytic theory accepted theory in psychiatry and treatment was psychoanalysis.  The teachings of Freud underpinned how psychiatric patients were treated and how research was conducted.  Freud developed psychoanalysis as a way to shape psychiatric treatment around a theory that had some basis in science.  This theory saw the individual as the focus of the dysfunction and of the treatment.

Bowen had broad access to the library at Menninger’s and he read widely in the science and non-science literature in an attempt to find a way to make the study of human behavior a science. Some of Freudian theory had a scientific basis but Bowen believed that a fully scientific theory had yet to be developed.  He read in the sciences to discover how science dealt with human emotions.  His clinical work and reading led him to write a grant to study inpatient mother’s and their schizophrenic daughters in an attempt to understand how the relationship he observed between mother-daughter pairs developed and how to treat it.

Bowen received funding for his study at NIMH where he housed mothers and their schizophrenic daughters on a treatment unit designed to give them each support, treatment and to study how they interacted with each other and with the staff. Although the tension could be reduced between mother daughter pairs on the unit little further resolution of their relationship issues occurred.  During the first year it became apparent that the emotional oneness that was observed between mothers and daughters extended to the nuclear family.  Study years two-five included the fathers and siblings in the study.  The other change after year one was that individual psychotherapy was discontinued and family group therapy meetings were instituted.  Bowen reported improved results with this method of treatment.  He “saw” the family emotional system that was driving the behaviors and thoughts of family members.  Bowen reported it was like going from a seat on the 50-yard line at a sports event to the top of the stadium.  The whole picture was at once visible.

The research project focused on data collection on an almost minute-to-minute basis looking at who was talking to whom, when, how long, what happened next.  Diagrams were drawn and notes were kept in three forms during meetings.  Recordings were made of interactions on the unit.

I see Bowen using inductive methods in his research and to reach his conclusions regarding how family emotional systems functioned.

Like Darwin, Bowen was faced with the challenge of introducing a theory that was vastly different then the theory embraced by most professionals in the field. The individually oriented psychoanalytic theory of the day viewed dysfunction as within the individual in contrast to Bowen Theory that saw dysfunction as a product of the family emotional system.