The Human as a Part of Nature 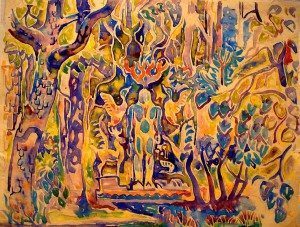 In an earlier seminar, one of the participants responded to a query, “What would tilt people toward systems thinking?” by stating, “When there is an understanding that “man” is a part of nature; man is part of other living things.”

“When humans recognize they are a part of nature” is not a startling statement to anyone who is a student of Bowen theory however I do think it is startling to consider the magnitude of this statement.

I have been thinking over the month about this question particularly in one of my efforts through this seminar is to work on my Beliefs Paper. I have particularly been thinking about the respectful use of the earth’s resources. I grew up in a home where very little was wasted; indeed it was a “sin” to not finish the food on your plate. Composting was familiar and just assumed. I recently read an article stating that in Vancouver Canada, which touts itself as one of the greenest cities in the world, wastes, 190,000 tonnes of food/year, 100,000 of which is said to be perfectly fit for consumption.

Waste has been an interest for a very long time. My Grade 10 biology project in 1970 was on the production of methane gas for fuel from chicken manure. There was a great deal of discussion about the need to develop alternate energy sources. This past week, to my delight, I learned that the City of Bristol in England is fueling their public transit system with methane fuel from treated and converted human waste.

My theological perspective is also one grounded in the “stewardship” of the earth’s resources, not one that places man outside of or having dominion over, but deeply bound up with all that is. The animistic traditions and aboriginal spirituality speak more congruently about the human as part of nature, as one among many, connected to all that is.

One of the appealing aspects of Bowen theory is its deep foundation in a view of man as part of nature. Human behavior has its basis in biology and evolution. I think the reading and learning in the natural sciences has been a formational part of my grasping Bowen theory more fundamentally.

To clarify my thinking I re-read John Bonner. He reminded me of the parallel processes operating in cells, bacteria, primates, humans and culture. The same principles that operate in bacteria also operate in the human and the human family. The cell adapts to the environment and the environment exerts pressure on the genetic material of the cell. Evolution will continue to exert pressure and nature will continue to find its way and through these challenges man will come to fully appreciate and have a better sense of “him” self as part of nature.